knocked up a simple game in swift using SpriteKit as part of a job interview. Its based on a game my family plays all the time using real physical cards. I put it in the app store under the name Rickety Kate and uploaded the source to Github. You might find it takes 8 to 16 days for the code in the repository to find its way to the app in the App Store, one and half review cycles on average. 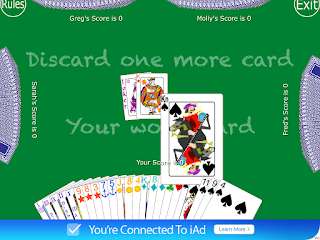 I probably over engineered this one. You can build your own deck of cards, anything from a 40 card deck with 4 suites to a 168 card deck with 10 suites. I knocked up some very simple input controls to control the options. 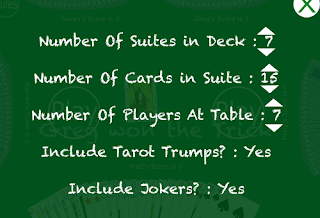 Putting 1x and 2x images  in texture atlases was a little finicky. I did a little experimentation and the 2 versions of the images seem to need to be in the same atlas for the 2x images to be automatically used in a retina device. Also here were problems unless all images in a atlas had the same number of versions e.g. they all needed to have 2x versions or none should have them. I have not tried using 3x images yet.

I am going put out a series of very simple games and apps. I put out another card game called Sevens. Next one after that is going to be a tilt game with retro neon line graphics. Set in the wreckage of a large city post alien invasion, you pilot spacecraft picking up refugees, and ferrying soldiers, diplomats, wounded, equipment and supplies while avoiding Lurkers, Tripods and Space Jellyfish.

Really nice app. I like what you have done with the graphics on the cards. The gameplay is nice too.

Could you write a little about how you did the localisation. Was it difficult? I am thinking of localising my App.

Very colourful app. Makes the other card games I have tried seem a little dull. It would be really great if the app was multiplayer. ANy chance of making that happen?